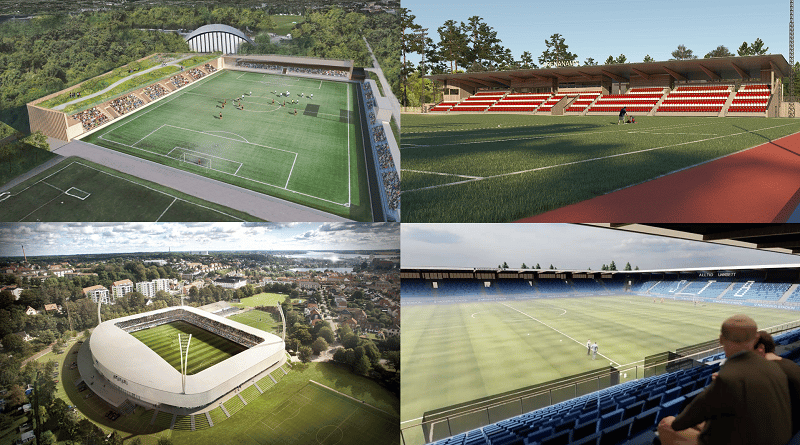 Here is our list of stadium rumors of Nordic clubs, that wants to renovate their stadiums or simply build a new ground:

– Check our list of confirmed renovations and new stadiums

OB Odense: 2020 OB has plans to renovate Nature Energy Park at a cost of about 100 mill. DKR. But OB really want a total makeover at a cost of staggering 263 mill. DKR

Vard Haugesund: Vard wants to build a new stadium with an 800-seat capacity

Skeid: The cub is set to renovate Nordre Åsen to a 4000-capacity stadium

Kjelsås: Kjelsås wants to turn Grefsen Stadion into a modern stadium with a new club-house and increased capacity

FK Bryne: Wants to build a new stadium, but the club has experienced several major set-backs.

Bodø/Glimt: The Bodø club is seriously looking into what to do with Aspmyra Stadion and at the moment it looks most likely that a new stadium will be build on another location.

SK Gjøvik/Lyn: Renovation of the old wooden stand at Gjøvik Stadion is completed. The club hopes to continue with further redevelopment in the coming years

4 clubs, among them Jaro: Wants to build a new stadium in Jakobstad at a cost of about 4,5 Mill Euro. Planned construction start autumn 2022 www.projectlivarena.fi

HIFK: Dreaming about building an own stadium in Södervik with a capacity of 5000-10000 and with a retractable roof

Hillerød Fodbold: Checking out several options to make their dream of a new stadium come through

Randaberg: The saga goes on. The club still wants to build a new stadium