Comment: For this year’s first match on the Faroe Islands, I made the drive from Tórshavn to the village Fuglafjørður. Good roads and small distances meant that it was a rather quick journey. Second tier league leaders and already promoted ÍF Fuglafjørður, welcomed the second string of KI Klaksvik to Fløtugerði stadium.

It turned out to be a classic Faroe Island match, due to the classic Faroe weather conditions. A lot of sun wind and heavy rain mixed together. It was certainly challenging playing conditions. Most people would rather stay inside in these conditions, but the locals are well used to it. On the pitch however, ÍF Fuglafjørður started well and had won the match already before the half time break. In the end it turned out to be another easy win for the leaders. ÍF Fuglafjørður which could continue to celebrate a good season at Fløtugerði! 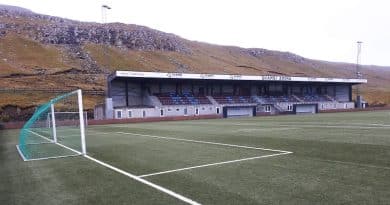